In 1998, Dr Olivier BONNARD, one of the members of the GILES group, presented a project plan to improve the dual mobility cups. 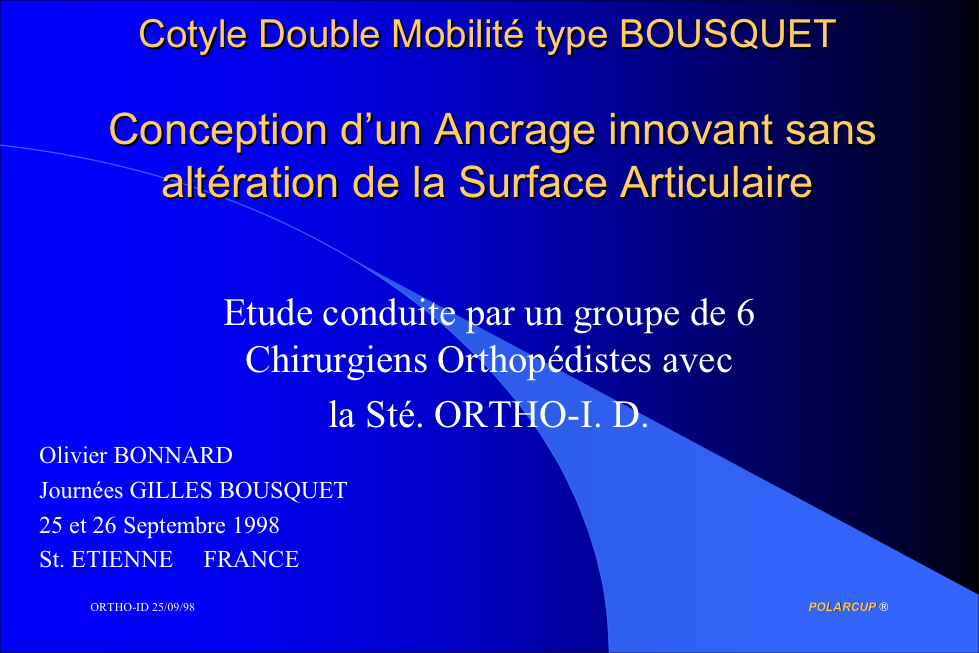 We decided to modify the cup’s external design to resolve some of the encountered issues.

All of us believed that Giles Bousquet’s tripod attachment was an essential component to preserve. Thus, we decided to preserve it and obstruct the holes which allowed some PE debris to migrate through, as observed on other cups.

There were 2 viewpoints regarding the tabs:

Either two tabs positioned on the hemisphere at 10:10, or a single tab positioned at 12:00, right above the anti-dislocating skirt, a cylinder on the equatorial line, at the top, and posterior to the cup. This greatly reduces the risks of a dislocation, particularly during critical movements.

Having a tab on Bousquet’s cup didn’t seem like the best option to us because we were obliged to drill deeper in order to bury it.

Some of us never used it.

A compromise was reached with the engineers with breakable tabs and removable pegs, allowing the usage of a tripod attachment if needed.
This clever modification gave us the option to implant the cup in 4 different ways.

On the original Bousquet cup, there were 2 lateral edges, slightly bent over the concave part, which would sometimes provoke psoas pains, conflicts with the prosthetic neck or even jamming of the mobile PE. It was therefore necessary to remove these lateral edges. 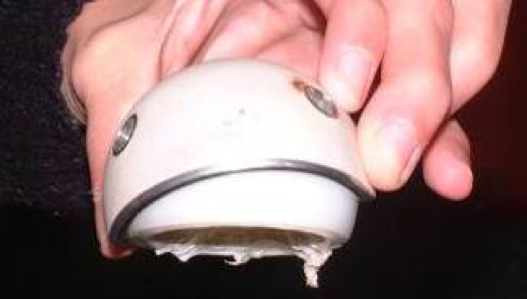 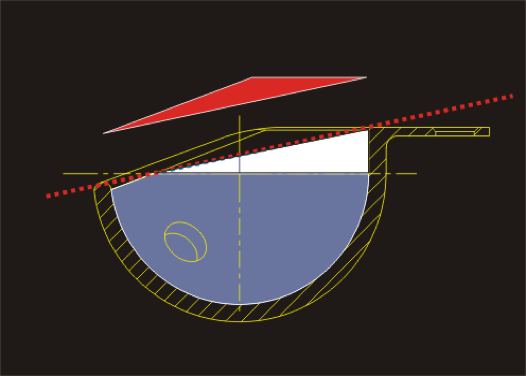 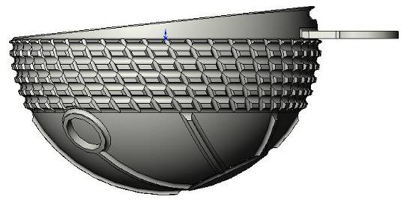 The alumine coating of the Bousquet and Noyer cups hasn’t fulfilled the needs for the secondary osseous anchoring.

Furthermore, we knew from experience that it would be more challenging to remove the Noyer cup during revisions. Its geometric macrostructures mechanically countered the movement once the bone had rehabilitated the voids in between the surface relief. The Bousquet cup, on the other hand, was smooth and could be removed easily.

As a consequence, we wanted to keep geometric macrostructures which brought instant primary stability during the pressfit , but could also be adjusted with a drill to the size of the impacted implant.

The external design included a dome which effectively shared the load. On the recommendations of the biomechanical engineer, the dome was shifted because he told us that the average resulting loads were applied on the roof of the acetabulum.

There is an area with vertical strips which prevent the rotation of the cup and a peripheral serrated area, similar to the Noyer cup, which has two functions: a primary pressfit and a secondary anchorage by osseous growth.

The steel has been improved by Orthinox which is much more resistant. It is now covered with a titanium layer for the secondary grip and an 80μm HAP layer to further bone ingrowth. 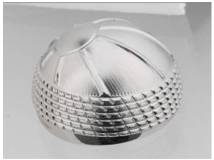 The parts made of polyethylene were also redesigned. A chamfer was added, restricting the contact between the femoral stem and the polyethylene while keeping retention properties.

The internal piston area was removed because it could potentially amplify the intra-prosthetic dislocation risk due to an impingement between the liner and the femoral neck-head.

Our engineers added an automatic re-centering system by slightly shifting the rotation centers. This allows the liner to return to its optimal position and avoids a definitive tilt of the liner and strong conflicts with the femoral neck while in movement. 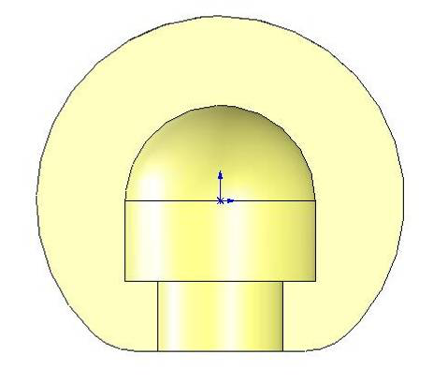 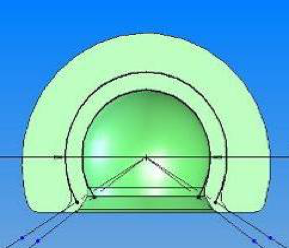 Next chapter : The History of Uncemented Femoral Stems