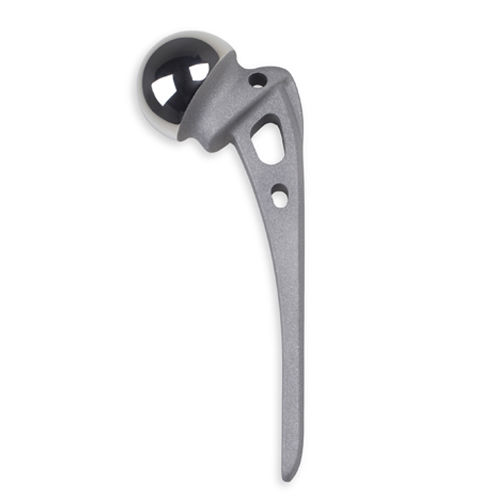 Before the popularization of cement, all implants were uncemented. An example of it is Moore’s prosthesis.

Back then, all prostheses were cemented and the process was even made compulsory in the US in 1972. 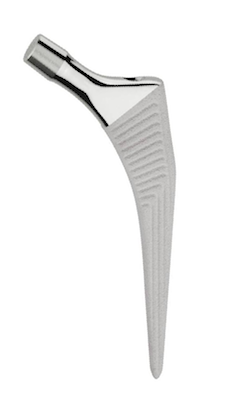 The cemented stem’s origin can be traced to Charnley stem in 1962. A series of different stems followed in the late 60s and early 70s.

Many cases of prosthesis becoming loose were reported 10 years after the introduction of the first implants.

Radiographies and direct observation during surgeries showed that the cement was deteriorating and that osteolysis was extending around the stem.

The formation of an interposition membrane was the loosening’s macroscopic proof.

At the time, the cement was considered to be the main cause of the loosening. 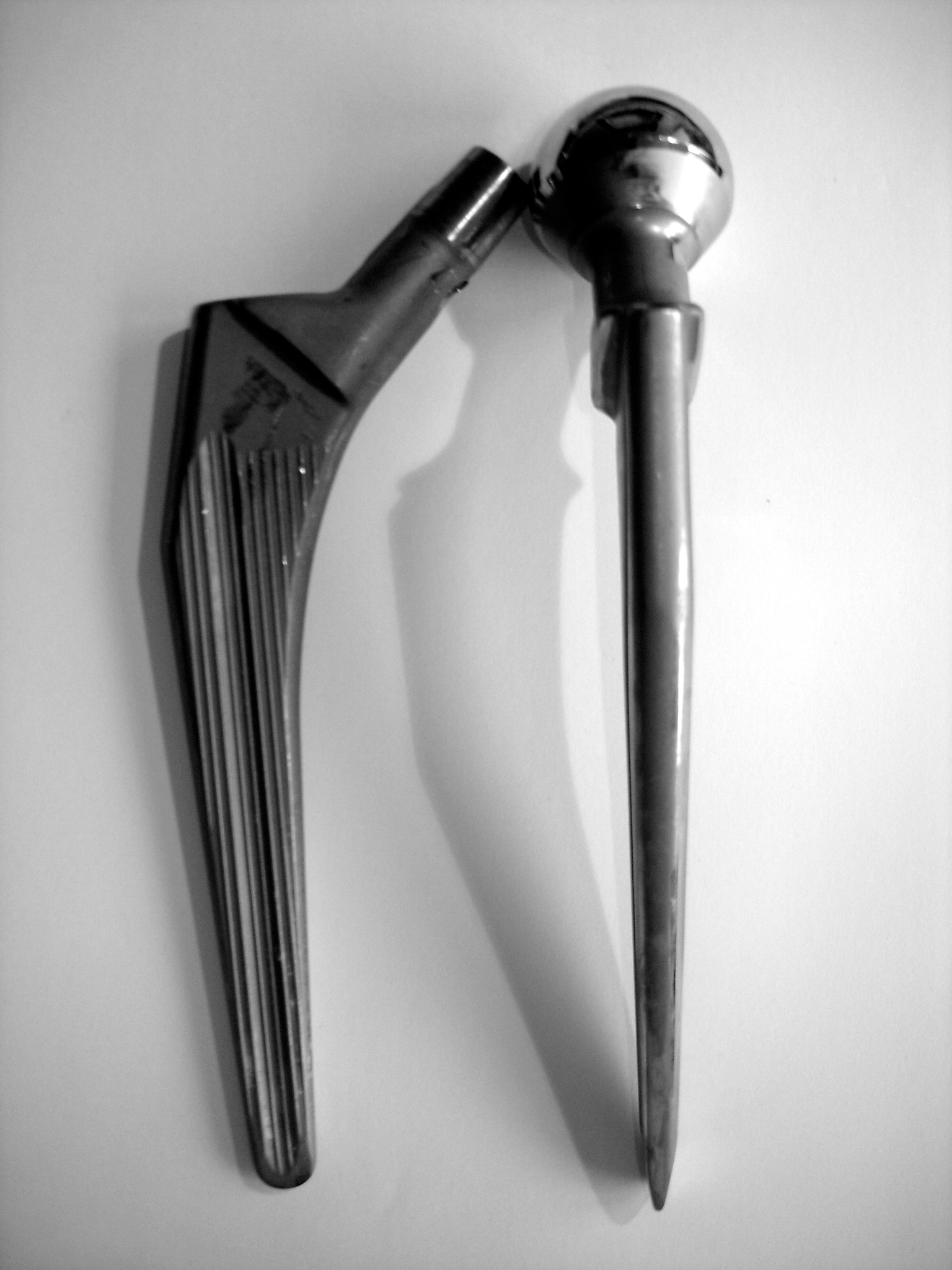 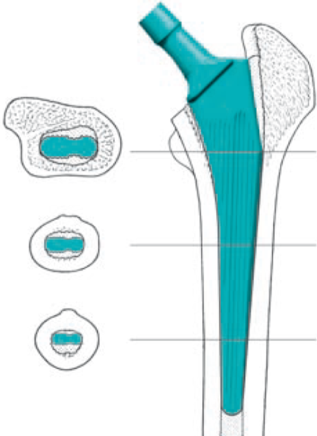 It was in 1977 in Switzerland that Maurice E. Müller developed the primary anchorage and named « The Self Locking ».

Up until today, his ideas still fundamentally influence the design of uncemented hip stems.

At first, the challenge was trying to find the right coating which promoted osseointegration.

Judet’s poro-metal coating or Lord’s madreporic allowed osseointegration, but were quickly abandoned because they were non-removable.

In the 80s, type SL, Lord 2, and Bousquet stems, were too voluminous to receive a support or an anchor screwed into the cortical bone. 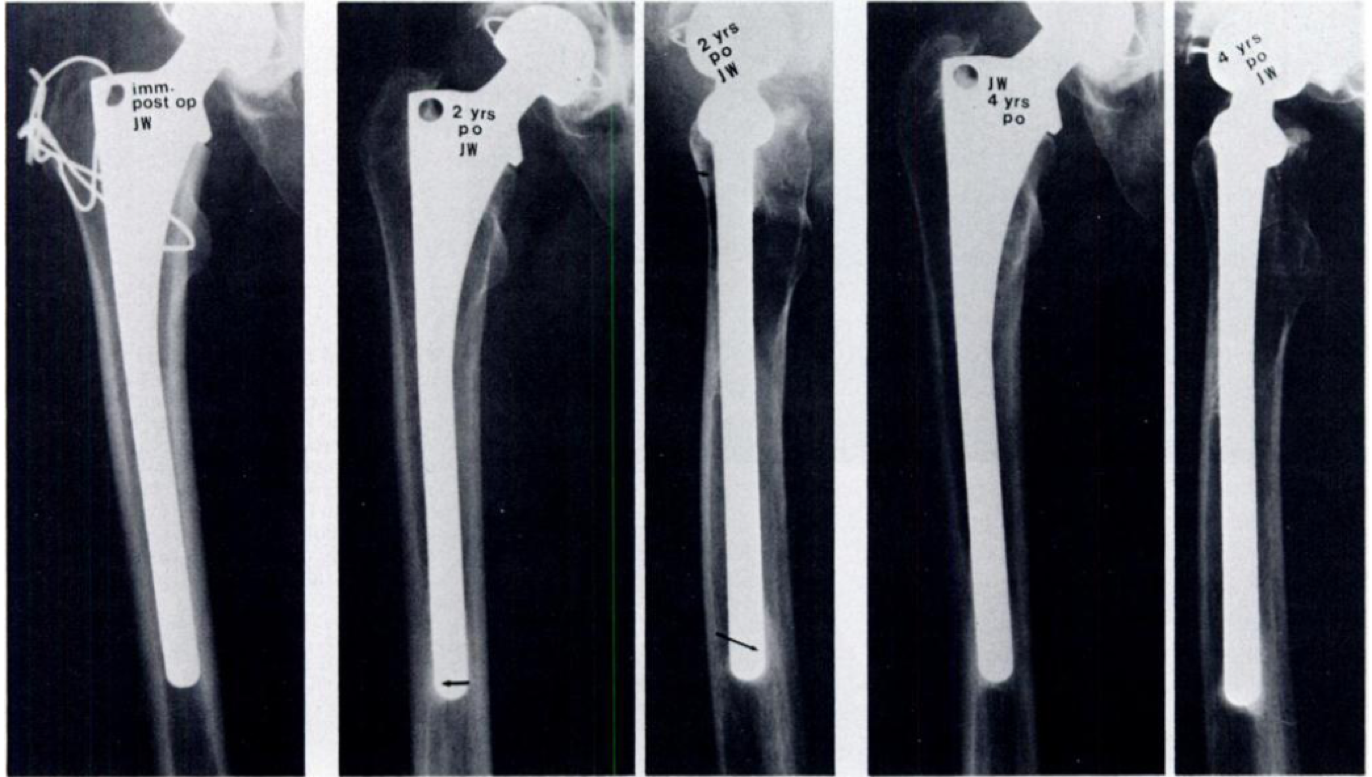 But the major issue with all these uncemented stems was thigh pains due to micro-movements and distal fixation, inducing proximal stress shielding.

Most of the first designs were bead blasted and HA free.

Stems were often long, thick and round as you can see on the X-rays.

To avoid these problems, some of the new designs appearing on the market integrated a partially coated proximal part.

However, literature reported a thigh pain rate of about 30% for the AML and the PCA associated to distal migration for the collarless PCA. 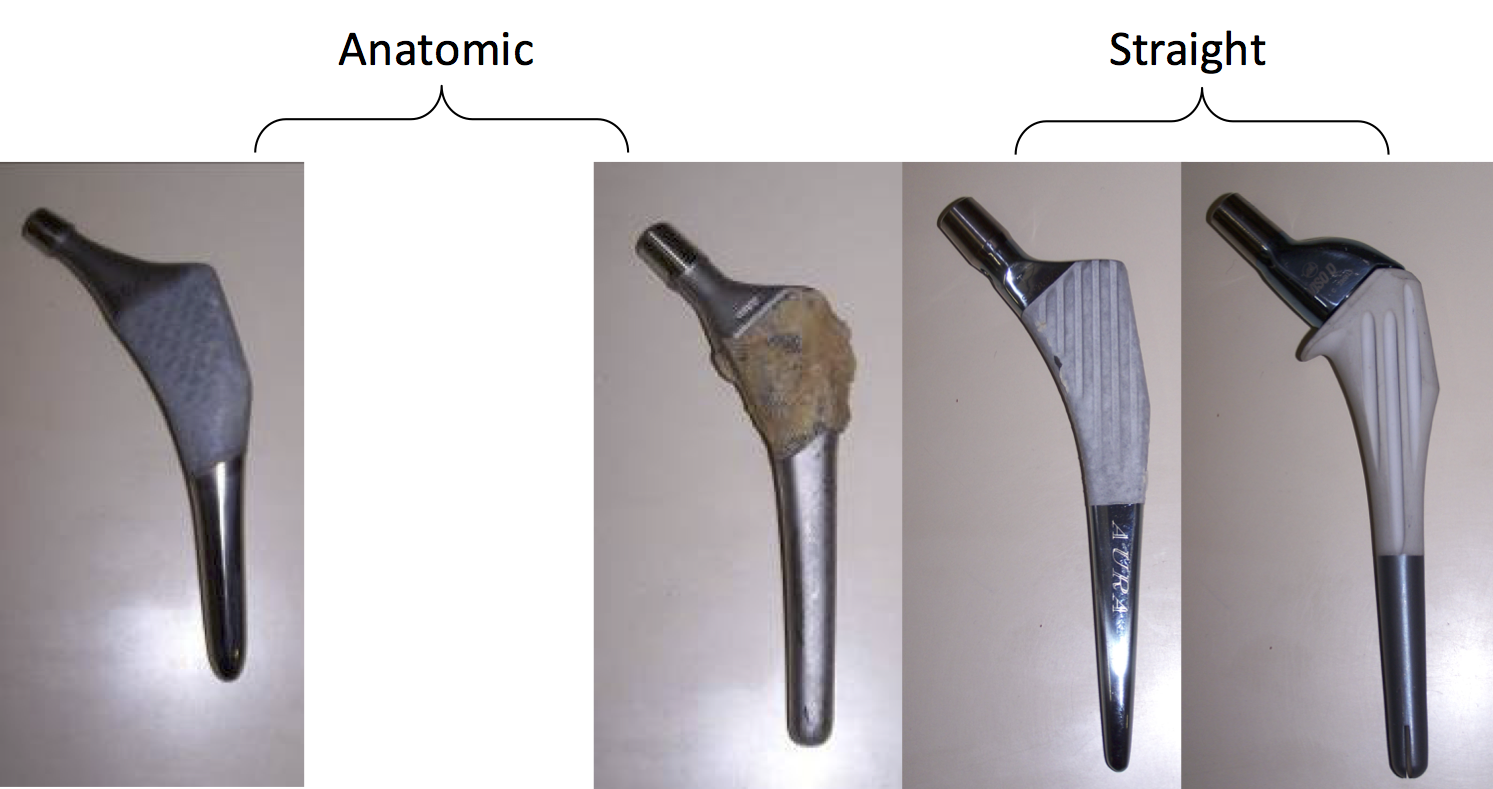 At the end of the 80s and early 90s, new designs were introduced with proximally coated anatomic stems.

In our group, we have experience working with all these different stem designs.

Here you can see some retrieval revisions due to thigh pains.

I would like to add that we have observed these issues on anatomic stem designs as well as on straight stem designs.

One of my colleagues in the Giles Group reports 10 revision cases out of 400 due to thigh pain. 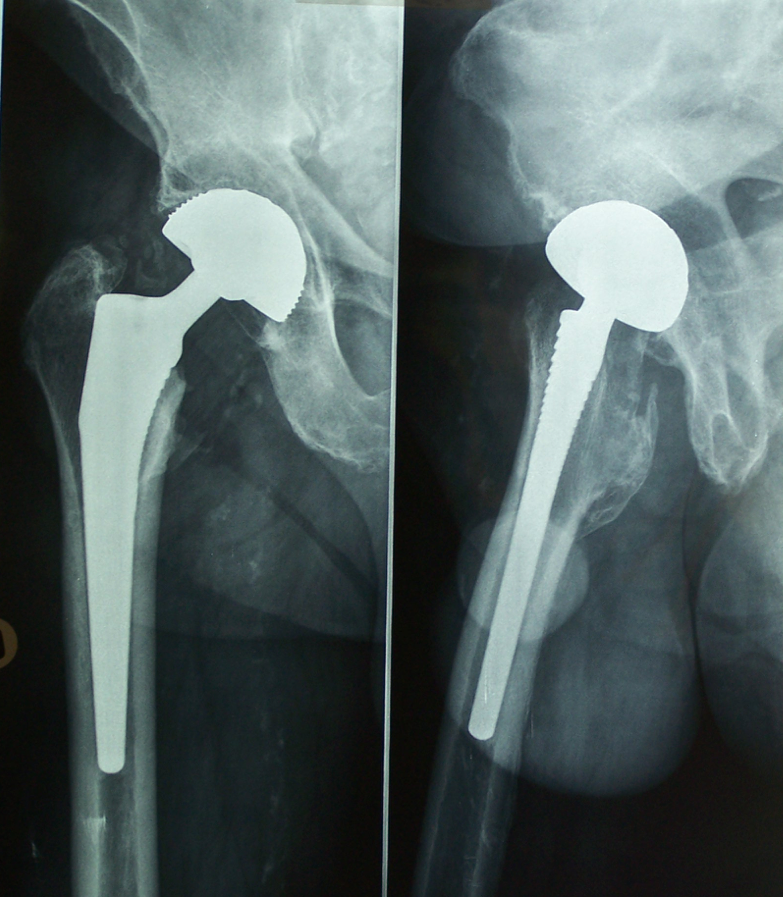 The Corail stem was invented in 1986

It is a fully-coated straight stem.

Members of the Giles Group have implanted a large number of Corail stems. All members have noted the disappearance of revisions due to thigh pain.

However, other issues were encountered which weren’t related to the stem’s anchor. 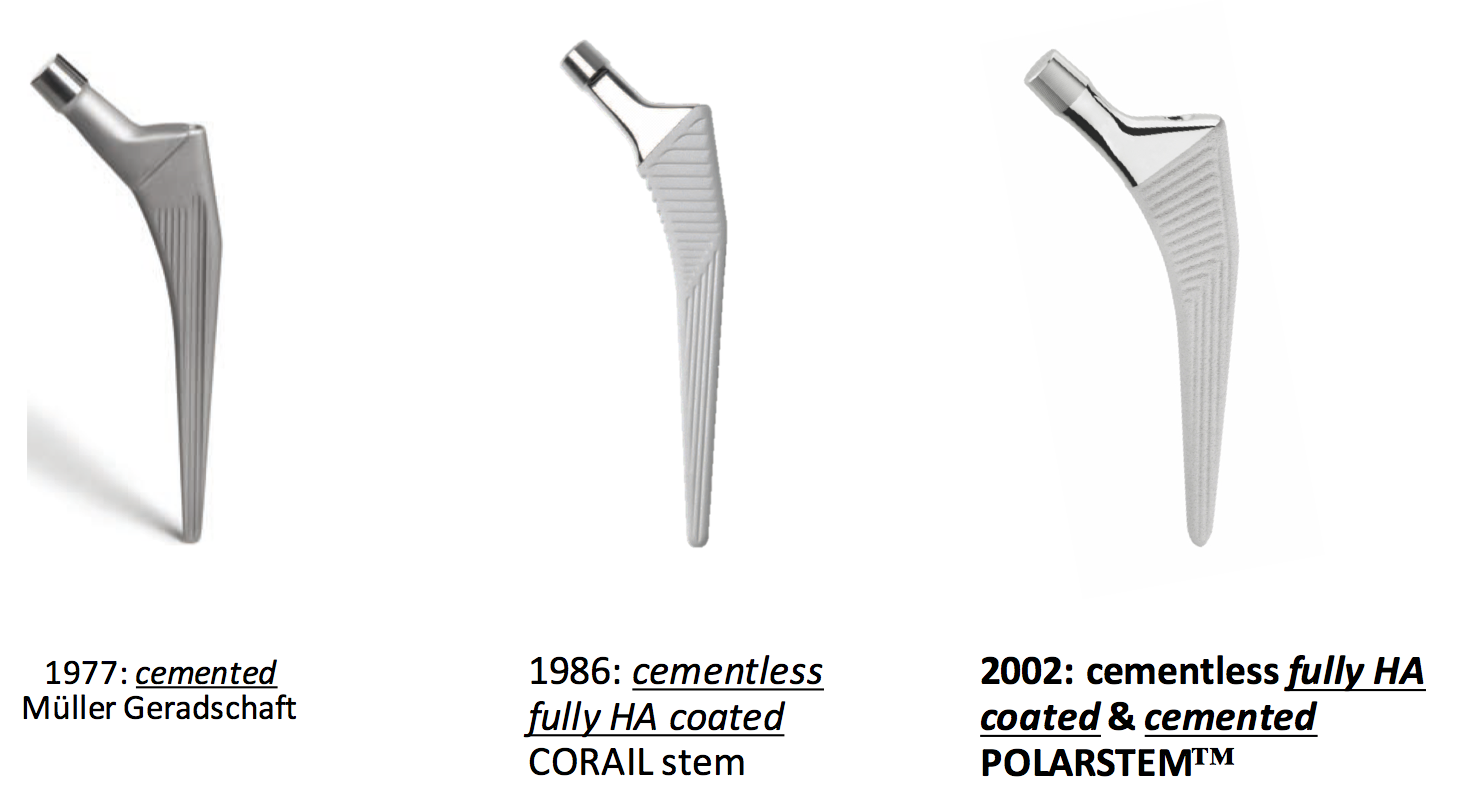 In the year 2000s, the uncemented stem evolved once more.

Their fixation capacity further improved and the hip’s offset was corrected. These new stems also facilitated direct anterior approach, minimally invasive surgeries, and the installation of the implant in a narrow femoral diaphysis with a thick cortical bone.

These new stems were a synthesis of the following designs:

Next chapter : The History of the Development and Conception of the Polarstem